Firmware is an essential part of modern computing. It comes in the form of software (programs) that reside on a computer’s motherboard, which controls everything from how the CPU handles data to how the graphics card processes information. Firmware also provides instructions for devices like printers and scanners as well as any other peripheral connected to your PC or laptop….

Firmware is a type of software that is used to control or monitor electronic devices. It can also be referred to as the software on a computer chip. Read more in detail here: what is firmware used for. 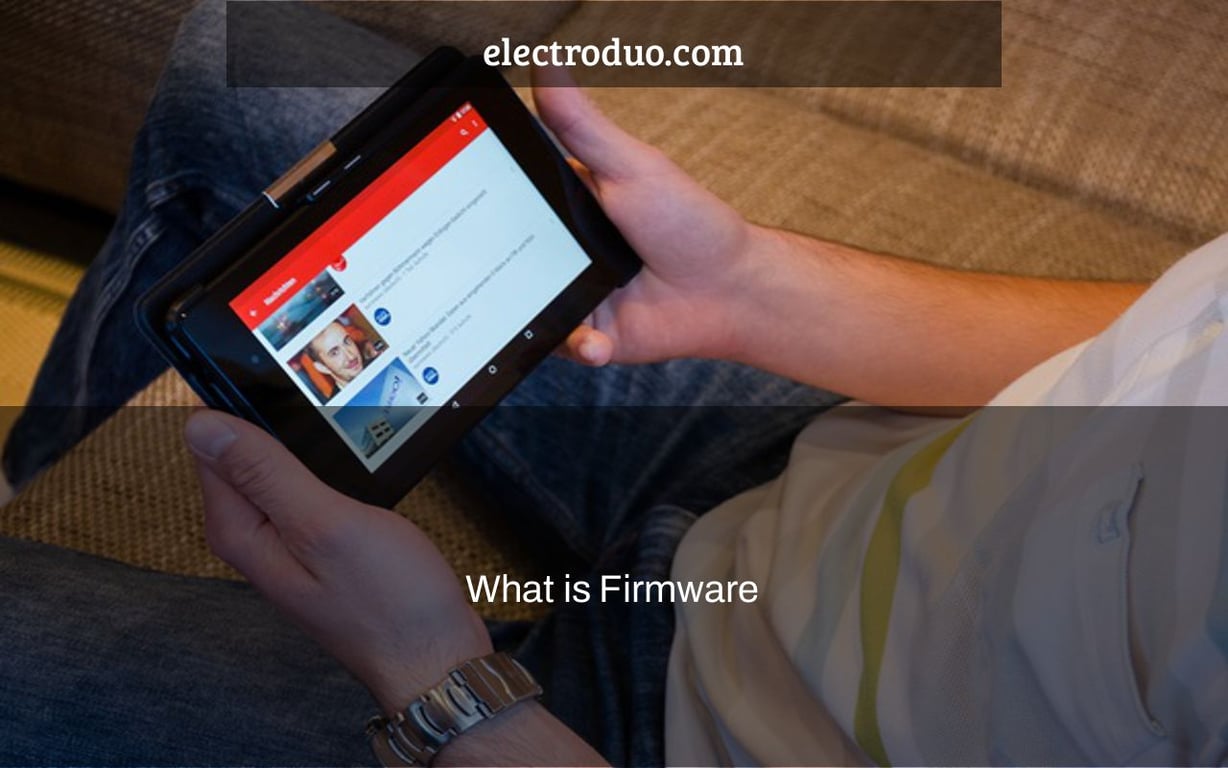 Firmware is nothing but software that has been permanently installed in a microchip, device, or machine, usually done by the manufacturer. This post will discuss in detail about What is Firmware and How Does It Work?, its types, how to install, uninstall & update Firmware for Windows and Mac OS.

What is Firmware and How Does It Work?

Firmware is needed, rather than normal software, to maintain, control, or operate hardware in the background. Firmware is stored in ROM (Read Only Memory), and without it, fundamental computer equipment like keyboards and hard drives would not function.

Because embedded software or embedded systems are installed in hardware, they are also known as firmwares. Firmwares distinguish hardware and software, i.e., it resides between both. Firmware, like Hardware and Software, may refer to one or more components. However, we will use the term ‘Firmwares’ here for clarity and to prevent any misunderstanding.

Firmwares are used in a wide range of devices in most people’s homes, including consumer goods, computer peripherals, personal computers, vehicles, and so on. Firmware is stored on non-volatile memory devices such as flash memory, ROM, EPROM, and EEPROM.

Physical replacement of ROM Integrated Circuits is necessary for firmware updates, or EPROM or flash memory must be reprogrammed using a particular technique. Some Firmware devices are permanently installed and cannot be updated once they are manufactured. Firmware updates are often performed to address issues or add new capabilities to the device.

Let’s look at several instances to better grasp it. Firmwares are necessary to recognize a hard drive or visual card in a computer. Embedded Firmwares are essential for a hard disk to know how quickly to spin or when to stop. Firmware is necessary for a wireless network card to understand how to connect to Wi-Fi using a certain radio frequency.

Depending on the complexity of functionality and on where it is stored, there are three Firmware Varietiess, listed below:

Firmware at the Lowest Levels

This software is stored on non-volatile memory chips like ROM, PROM, and PLA. This level is considered an intrinsic part of the hardware since Firmware at the Lowest Level are stored on read-only chips that cannot be updated.

Firmware at the highest levels

To allow for updates, this Firmwares are used with flash memory chips. Compared to Firmware at the Lowest Level, they have often more complex instructions and makes it closer to software than hardware.

Semi-independent unit of a larger system is called a Subsystem. Since this level has its microcode embedded in CPU, LCD units, and flash chips, like Firmware at the highest levels.

How to Put Firmware in Place

To install the Firmwares, follow the procedures below. The USB Flash drive must not be removed, and the instrument’s power must not be turned off.

The zip file is saved on your PC. A USB flash drive is attached to the computer, and the *.prg file is extracted and transferred to the device’s root directory. This is where you’ll discover the USB’s downloaded files. Follow the on-screen directions to install the Firmware, which will show a succession of various messages. When the update is finished, a pop-up window will appear to confirm that it was installed successfully. The USB drive may now be removed from the slot.

How to Remove Firmware

Non-volatile memory like ROM, EPROM, PROM needs Firmware for operation and functioning. Most devices get Firmwares updates regularly, but if something goes wrong when you run an update, you cannot just unIt should be installed. Instead of removing the Firmwares, you must replace it with another version of the Firmware. So, the steps are shown below:

How to Update Mac OS Firmware

Firmwares offer the instructions for your Mac’s hardware to function properly. Many low-level functions, including as temperature, power, and sleep management, are controlled by the instructions. Firmware upgrades are required to enhance the hardware’s dependability and to offer extra new capabilities to your device.

The app store is where you can get new software, including Apple Firmware upgrades. You may verify the version number of your Mac Firmware if you’re not sure what version it is. If the version is obsolete and a current update is not accessible in the app store updates area, you may manually or automatically download and install the most recent version, as demonstrated below:

Updates are made automatically.

Follow the instructions below to run the update automatically:

Follow the procedures below to manually run the update:

How to Update Windows Firmware

Microsoft has been installing drivers for your device whenever your computer receives an update. A user may manually upgrade the system firmwares by heading to Computer Management. Additionally, certain computer models may need manual installation of Firmwares from their support website. To do so, follow the procedures outlined below.

Also, ensure sure your computer is connected to a power source and that it is not turned off.

Firmware is a software that is used to control the hardware of an electronic device. It includes both system firmware and user interface firmware. The word “firmware” comes from the term “programmable read-only memory”, which is what it originally referred to. Reference: what is firmware in android.

What is firmware on a computer?

A: In the computing world, firmware refers to computer software that is preloaded on a device and can be updated by an external source.

What is firmware and examples?

A: Firmware is the software that runs on your computer and makes it function. Examples of firmware include Windows and macOS.

What is the role of firmware?

A: Firmware is the operating system of a computer or piece of software. It is often used to update devices and provide features that were not previously included in an older version, for example back-up files in your external hard drive.